I come to you, from isolation, two months after the last newsletter. Things have been okay (I’ve been a little busy at work), but let’s just say that if I really wanted to be in isolation, I’d have joined the Navy, and chosen to become a Submariner. Anyway, here goes -

So oil had some fun, huh? The last time I wrote about oil, it was in the context of Saudi Arabia and Russia playing a game of chicken. But something better (and weirder) happened last month. The May 2020 Futures contract for West Texas Intermediate (WTI) Crude Oil, which expired on the 21st of April, was settled at negative US$37.63. If someone pays you to take something, they must have been really desperate to get rid of it.

One reason that’s been repeated by everyone is that there must have been no place to store the oil at Cushing, Oklahoma (where WTI is delivered), and so futures buyers panicked, put in market sell orders and the contract ended up being settled at $-37.63 for the day. Cushing is a back-of-the-beyond type place, where even crows don’t fly to because why would they. And WTI delivery is only offered at Cushing, nowhere else.

But storage was not an issue. I know people who were willing to take delivery, who made calls to Cushing, and were told that there was storage available at Cushing if you were looking. So what could have happened?

The thing about oil is that a lot of people who have no intention of taking delivery of oil trade in it. And they need to get the contract off their hands before the expiration date. So, one thing that could have happened was this:

We’ve all heard of short squeezes. The rapid rise in the price of Tesla stock (TSLA) earlier this year was a classic short squeeze. This right here, ladies and gentlemen, was its exact opposite - a long squeeze.

Here’s an interesting take on things that’s slightly different from the regular ones. Anyway, the Commodities Futures Trading Commission (CFTC) is investigating what the hell happened, so this matter is in the hands of experts now.

Imagine what it must have been like to have been trading oil at the time - you’re looking at your screen, seeing the chart print this 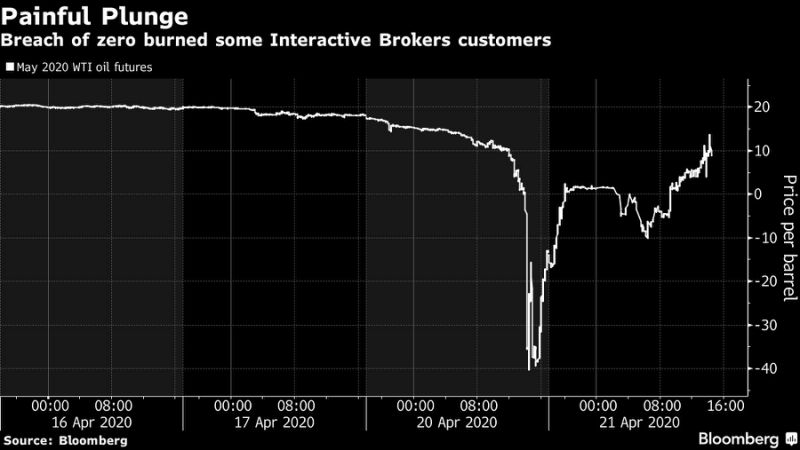 But you would not have seen the chart print this if you were an Interactive Brokers (IBKR) client. Their system stopped displaying prices after oil went below $0; their clients had no idea of what was happening exactly. They had to get their quotes from Yahoo Finance or wherever. IBKR played fair, however. Their chairman accepted blame, and from the looks of it, they’ll be swallowing the clients’ losses from when the contracts went below 0.

By the way, who made money here? And I’m not talking about regular money when I ask this, I mean the “THEY KILLED IT” type money. Two kinds of people - those that went short when oil was above $10 and those that went long when oil went negative. But more people lost money - and they come from all around the world - China, South Korea, Russia, India, you name it.

That last bit was quite heavy on info, so here’s something to offset it. In India, some monkeys went wildin’. They attacked a gent who was transporting COVID test samples of four infected patients, stole the collection bottles from him, and were later seen chewing those bottles. The locals now fear for their lives, because monkeys being monkeys will roam around, cause mischief, lick things (maybe?) and spread the virus (if monkeys can contract the virus, that is).

Man do I love the French and their quirky stories. This is a fun one. A senior citizen (he was 64 years old) working for Dassault Aviation must have been quite popular with his coworkers, because, they decided to surprise him with a joyride in a Dassault Rafale fighter aircraft, as a co-pilot (chap in the backseat). This happened back in March 2019.

Bear in mind that at no time did the 64-year-old gent ever express an interest in flying on the plane, a detail his colleagues conveniently omitted to ask him about. Anyway, one day he showed up to work, and they revealed the surprise. The man felt that he couldn’t refuse their offer, because it would seem rude or whatever, and his heart started to beat faster. He said yes.

They cursorily prepped him for the flight, did a couple of checks, and strapped him in. No, scratch that, they let him strap himself in. His heart started to beat even more fast.

His g-suit didn’t fit him properly, he hadn’t strapped himself in tightly enough, and his oxygen mask was unbuckled. The plane took to the air. Some manoeuvres happened, and compound that with the fact that he hadn’t been strapped in well and his oxygen mask was unbuckled, he panicked (his heart was beating pretty fast at this point). To steady himself, he grabbed the ejection seat handle. He grabbed onto it so hard, though, that he ejected.

Pretty insane, huh? Here comes the actual insane bit. Because of a technical snag, the ejection seat of the pilot of the aircraft remained in the plane, even though his roof came off. The pilot thankfully managed to remain in control of the aircraft, dumped the excess fuel and made an emergency landing.

As an aside, Martin-Baker (MB) of England makes the ejection seats. If you eject safely with the help of an MB seat, MB will mail you a tie, a certificate, a tie-pin (brooch for ladies) and a membership card specifying your membership in the Ejection Tie Club. They also made a limited edition watch in partnership with Bremont, whose story is better told by Jimmy Fallon of The Tonight Show. Anyway, because of the ejection, the Tie Club welcomed a new 64-year-old member in 2019. Hope you have a long and happy life, dear fellow.

So that’s it for this week. Take care, and stay safe, people. Stay away from monkeys, just in case. And if some French people offer you a joyride in a fighter aircraft, feel free to say no. If you do say yes, please for god’s (and the pilot’s) sake keep your hands away from the ejection seat handle.